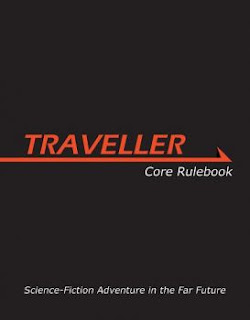 Here's a fixture of many a starport, a low-level gambler and general thug. Sometimes, they end up wearing nicer clothing, or looking for less dangerous work.

Mo Lungu grew up on Agidda/Sol, where his abbreviated schooling trained him in shipbuilding, but he really was more out with friends. He rebelled against his respectable family, and ended up with a gang on the streets when he dropped out of school. Like most in his 'profession', he didn't exactly make a lot of friends, more likely to have enemies. Particularly, Kjell Langdon, a minor crime boss. He's been living by his wits, but has a feeling now that many of his former associates have been sent to Newcome/Banasdan, it's time to find a less risky job than occasionally breaking legs, and stooging for shady merchants. He's currently at Fenris/Sol, where he's looking for gainful employment when he's not working the tables at a casino. He's also working on some unofficial supplies for a number of people, as well.