Crossing Over with Another Game 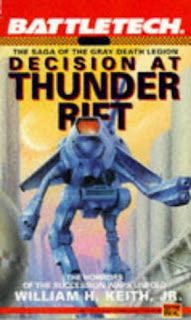 I've long been a fan of the BattleTech setting and game. Having gotten to understand it more, I have participated in the community off and on since early 2000, after obtaining a boxed set the year before. The novels, particularly William H. Keith Jr.'s Decision at Thunder Rift, got me interested a while beforehand.

Once I started building up my Traveller collection, I ended up getting a copy of the well written Ground Forces for the GURPS Traveller line. I really enjoy how it sets up a complete force, with company and battalion headquarters, and also explains how the staff works as well as actual command. One major point for enhancing my suspension of disbelief was how the about the author mentioned Mr. Berry's expertise in not only weapons, but the floor buffer. 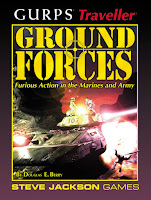 Almost 10 years ago, I wrote a simple, planetary militia unit for my own amusement. Not the greatest troops in the universe, but older and younger than average people who wanted to defend their homeworld, with the Commanding Officer being a MechWarrior who could not get back to his normal unit because a war broke out making interstellar travel impossible. A few years later, I wanted to update it to the end of the conflict. As the world I picked was largely untouched, so any combat experience would have been from defending against small scale raids, and some of the troops would have been given offers they could not refuse by commands higher in the food chain to join.


Read more »
Posted by Michael Thompson at 21:59 No comments:

Email ThisBlogThis!Share to TwitterShare to FacebookShare to Pinterest
Labels: BattleTech, GURPS, Having Fun

Between Robert Weaver's excellent series on high powered Traveller play and most recent post, I thought of the Venus sequence in Heinlein's Space Cadet. I got my 1992 printing in 1995 or 1996, and it has stayed around me ever since. It is an excellent example of low powered play. The characters have few skills useful in this setting, and are mostly relying on their personalities and inherent wits.

The characters have landed a small spacecraft, tail sitting as God and the Lieutenant intended, in a swamp on Venus.Their 'Jeep', a short duration craft that sounds rather like a Launch or Ship's Boat , ends up rolling over into the swamp with the contents of the ship's locker. The skill sets the men have, standard shipboard skills with each one having a specialty, with Oscar having Electronics, Matt Navigation, Tex Engineering, and the leader, Lieutenant Thurlow Gunnery. All are useless for the most part in the story, with primitive electronics repair and rigging a camp stove as the only real skill usage I read. The most important skills the men have are Oscar's cultural competency, and a determination  to do the right thing. The cadets former classmate, Burke, is as close to a murder-hobo a Heinlein could get; self-centered morality, and willing to do anything to make a profit. He even attempts to bribe the heroes. The skills they use are largely soft skills like persuasion and cultural knowledge. The climatic scene in chapter 15, where Oscar persuades the City Mother to treat the stranded cadets as people should be a way to think about social setting in adventure. One character, with the right knowledge, hits the right buttons to get out from between a rock and a hard place.

From there, it's all about tying up the loose ends to me. The old space ship Astarte, being in the area is a nice little deus ex machina, to get them home after two other spacecraft are ruined by the pests of tropical Venus. While the "Venus is a jungle world" trope is better suited for Space: 1889 than Traveller, but it can still be applied to visiting a world with a hot climate from an extended system generation. Each one contributes something to the recovery, but it was from building a relationship with an alien people, something Heinlein notes repeatedly that we as humans will identify as a group when faced with outside intelligences.

But what really makes it low power is how the highest position any character has is the leader of a small town. There's no reason to avoid the occasional low power scenario in most games. A situation like this, where the role playing is mostly on completing peaceful goals, and getting home, should be the players goals. A goal in a RPG should be to get the players thinking about how to get their problems solved, as having a good time. I am reminded about Marc Miller's example of play in Space Gamer #40,  where shooting only happens at the end, as the players hightail it out of a group of cannibals. And at the end of the novel, it turns out the man whose wits were vital to their survival, has been promoted for his efforts, and is with a return expedition, part of the making your own reputation in the universe, and providing a bridge into high-level play.

Also, I found a really nice review of the novel at Every Day Should Be Tuesday.It seems like a nice fiction blog I'll be looking at more often.

Posted by Michael Thompson at 21:54 2 comments: