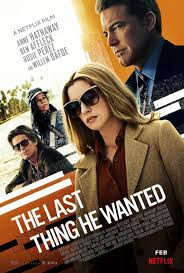 A few weeks ago, after getting hit by the ad blitz for it on other social media, I watched the rather forgettable "thriller" The Last Thing He Wanted while out of town on business. The plot, once you make sense of it, is a major power runs illicit arms shipments into a politically controversial brushfire war, with a sympathetic bystander drawn in. Except she's not really a bystander, in having previously covered, ostensibly from the side of the rebels, a neighboring civil war.

After I finished the movie, my opinion is that it was something to watch while waiting on the Friday Night pizza delivery to get to me and then eat the pizza. Also, it could have used another draft or better editing.

However, many of the set pieces would be good for Traveller adventures. Having a dying friend or family member offer a big payday they'll split with you is an reward pull. Dirty secrets of the government works a well, even if you're running a Traveller Universe where Norris is as great as the propaganda makes him out to be, and Strephon is the Good King. Powerful governments often make cruel decisions and work with unscrupulous people, and good men will accept doing them as the alternatives are far worse. Or maybe the crew gets hired to take some cargo to an unmarked starport on a backwater, along with a representative or two, and the crew is their ride back, but they don't make it. Do the characters make their scheduled departure, or go after them? People those with sources, like organized crime bosses, spymasters, and successful smugglers, who can easily track down an obvious outsider doing shady things. Just keep the travel times in mind here. Perhaps the new friend is really the agent of a government official you are on the wrong side of. Don't be afraid to steal ideas from forgettable movies and books.
Posted by Michael Thompson at 22:33 No comments: