The jump from Peraspera to Loki was uneventful and accurate, taking 170 hours, arriving 103 diameters out from Loki. Nothing appeared to the crew at entry, and they relaxed from stations to the N-space watch. Contact and messages from the world indicating nothing out of the ordinary. The local Military Governor, a Lieutenant Colonel of the Unified Army of Sol, and his garrison of 400 ensured the world listed to the dictates of Lagash, Muan Gwi, and Capitol. In truth, the world was little more a small town huddled around a small starport, extracting chemicals from the atmosphere and fluid seas under a couple of domes. A few smaller domes, with tiny populations, were on the continent. The Boxing Kangaroo was just another reminder of that rule, but also of the responsibilities that came with it.

Two uneventful days after entering the system, only seeing the scheduled courier run to Ember/Sol jump in, a signal came up from the surface. It began, “LYSANI LABS REPORTS R/V BURWELL COMMS FAILURE. RESEARCH PINNACE WAS CONDUCTING SUPPLY RUN, AND NO CONTACT LAST. REQUEST INVESTIGATION OF POSSIBLE ACCIDENT.
WAS IN SYSTEM TO USE LOCAL CHEMICAL PRODCTS. LAST REPORTED POSISTION, GEOSTATIONAIRY ORBIT 180 FROM STARPORT.” Sublieutenant Hassan examined the orbit change required, and began to plot the intercept, as the whole transmission was read by Lieutenant Brickley, who then began to prepare the orders. Once satisfied, the ship changed orbits. Examining his resources, Brickley wrote this watchbill:

Per standard procedures, the spacers, boat crew and Yap would be in vacc suits, with the rest of the Marines in Battle Dress. Spacers would carry auto-snub pistols, and the Marines have gauss rifles and cutlasses. The remaining crew, while short, would be able to operate the ship if losses mounted. The info on the Burwell noted her central docking adapter would be empty, so Afari could easily dock with it. They also had the codes to come aboard. The plan was simple. Hassan and Hall would operate with Appledorn and Hoedmaker as one search team, Brand, Castillio, Fini, and Binici the other. Sergeant Valdez would stay at the lift shaft as a relay point to the boat and one-man reaction force if needed, and Yap would stay on the Ship’s Boat, with the crew as his guards/stretcher bearers.

Launching from 200 km away, the Joey flew to the unresponsive ship. Brickley kept trying to hail the lab ship, but no response. As the boat closed, the crew in the cockpit watched as it resolved into a standard lab ship ring, then, it came clear the lab ship was in a slow rotation. The docking port was a stable, and gravatics made the transfer easy, as the party in the boat barely noticed the alignment with the ship’s systems. Appledorn and Hassan entered the lift, and exited into the reception area. Appledorn ran to the far end of the darkened space, covering the passage, while Hassan button hooked to the right, covering the near side approach to the reception area. Next came Fini and Brand. In his hulking battle dress, Fini replaced Hassan at the entrance, and Brand and Hassan started to examine the space. The biggest thing was the plaque on the bulkhead. It stated the ship’s name, statistics, and owners, the bulletin board beneath noted the chartering party, Lysani Laboratories. The overhead lights were smashed, but the helmet flashlights did allow them to find a panel concealing a locked maintenance hatch. The salvage party assembled, and they moved into the groups. Hassan’s team heading to the engineering control, and Brand’s to the main bridge, and, hopefully, meet in the main lab. Valdez told them he had a good link with the boat. Atmosphere testing showed it was good, so the vacc suits were relaxed, gloves coming off and helmets stowed. The battle dress was not relaxed.

Hassan’s team crept to through the ship, going room to room. The first stateroom they checked had a puddle of water on the floor, and broken lights again. Nothing in the locker, they closed the door, placed 160 km/h tape on it, with “DS” in a large hand on it, stating no survivors. The next featured a single blinking light, and a pole laying on the deck. Able Spacehand Hall, examining the lockers, saw the largest one was slightly ajar. Opening it, she screamed as a body fell out, landing face up. Hassan jumped to look in reaction.

“Is that a crewmember? Sir?” she asked, noting his missing arm.

“Looks like it.” Hassan responded, then called to Marine Appledorn, “Call the boat, tag a crewmember as dead.” They stepped out, and resealed the door, placing tape on the door with “CR”, nearly gagging from the stench. Hall put her helmet back on, to keep from having to smell the

The next stateroom was unremarkable, and marked “DS”. Continuing, the next one was dark. A quick examination showed stripping of the rack and small blood smears, almost like whoever removed the contents bruised their knuckles on something, and stained the area carrying it out. The room was marked “DS”, and the group reviewed the next empty stateroom, but it turned up empty, again marking it “DS”. The following compartment should have been a stateroom, but it turned to be a small library, with reader stations, and an array of scientific documents. Looking at them, Hassan noted the ones spilled on the deck were all about biochemistry, a topic he had no particular background in. The escape pods across the passage were all untouched. Then his radio crackled to life.

The other party started looking through the stateroom in the other direction from the first. Fini and Binici provided cover around as the first door was opened, into an unlit stateroom, as Castillo switched on the lights, revealing a few boxes in the corner. He looked into them, and said, “MM1, it’s just someone’s crap. But this looks nice,” holding up a sprig of green leaf encased in a clear solid.

“Put it back. We aren’t here to loot,” Brand admonished him, as she checked the rest of the empty room, before clearing him out of the room to tape over it with “DS” written on the tape. They moved to the next compartment, a conference room. Looking at the documents on the table, it was notable they were all about combat drug experiments. “Do you know much about combat drugs?” Brand asked the Marines outside.

Fini answered, “Not much, your ladyship, but I got to use it once in unpowered combat training. Speeds up, reduces pain, but leaves you winded afterwards. We don’t use it much.”

“Thanks, and how many times to I have to remind you, I’m not her Ladyship on duty!” came her reply, as they marked the space as “DS,” grimacing about the minor dressing-down. The following space, the formal dining room, was set up for a meal, but undisturbed. The quick search found nothing, and again, the space marked “DS”. 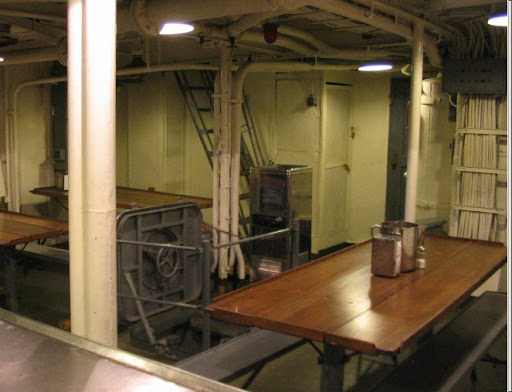 Moving beyond, the group sees the main mess deck, and the galley off it, the area is dark, but
stepping to bulkhead, Castillo turns on the remaining fixtures. In the poorly lit area, they saw the far end tables pushed aside. Across the serving line, they notice the lights are all smashed. Marine Fini stood back to cover them, as Brand led Castillo and Binici into the kitchen. It’s a fairly standard starship galley, with a large freeze box attached. As Binici opens it, Brand, remarks, “Oh god, oh god, oh god.” Binici hurredly slams the door open.

Inside, they see the horror show of twelve human bodies, hanging on hooks. Some missing limbs, the nearest one Castillo examines, “That looks gnawed on. Is it just me, or are those human bite marks?”

Narrowly keeping her lunch, Brand thinks for a second. Coming up with the right answer, “Close it up, put tape over the door, and market. CR on there.”

“Aye-aye!” the two respond to the command, happy to do something normal here.

She thinks for another second, and brings up her radio. “All parties, this is Search Two. We found twelve, that is one-two, bodies in the galley freezer, and they look eaten. We have a crime scene. Over.”

The Captain back on the Boxing Kangaroo, the boat, and Sgt. Valdez all copied. Sublieutenant Hassan copied, eventually, but noted he already had one dead body found. Waiting, she then heard Fini call out, “HANDS UP!” and the trio at the locker ran over to him, pulling their weapons. They find a typically sized man, looking at the Marine in Battle Dress, who then spins around and tries to attack Fini. His eyes go wide, and his lips curl into a feral grin.

Fini knocks the man with the butt of her gauss rifle, seeing him as non-compliant, knocking him heavily. Ignoring the hit, the man tries to attack her, but it does not affect her in the heavy armor. Castillo stands back, as Binici charges in with his cutlass. He hits the man, wounding him. Brand, her fear welling up in her, calls for Valdez and Yap to get there, as she looks to the lounge.

Continuing, Fini drops her rifle, preferring to engage hand-to hand at this point. Making contact, the armored fists knock the crazed man, who responds with another ineffective assault. Binici drops the man with another cutlass blow as Yap and Valdez show up. They quickly respond by cuffing the man, and applying first aid, as they take him back. Looking at each other, they understand they have to continue on, despite the violent situation. Uncertain, was this one of the cannibals who stored the bodies in the freezer?

Posted by Michael Thompson at 23:27 3 comments: