So, What Books Have Influenced Your Campaign?

Seeing how Appendix N from the original Dungeons and Dragons seems to be a thing, and this particular review of A Spaceship for the King, kind of got me an idea of what books are going to influence how I run this particular set of adventures. In no particular order at this point, other than what comes to mind.

And a bonus movie:


Questions, comments, and flames are nice, but venting spleen about the problems of the universe at me is not welcome.
Posted by Michael Thompson at 17:39 2 comments:

I've seen the question "What year was tech level X first reached?" come around a few times in various discussions online for Traveller. Here's my research on it for Imperial Society:

TL 11, defined as Jump 2, was first achieved during the 1st Imperium. 909 BCE (c. -5422 Imperial) is given in GURPS Traveller on page 47 in the side bar. This may have been the maximum technology level during the Long Night for production purposes.

TL 12, defined as Jump 3 and Meson weapons, was developed by the Terrans around -2284, and deployed within a decade. The Terran Confederation and the Rule of Man are not known to have exceeded this technological development. However, an out of the way lab could have made some TL 13 prototypes...

TL 13 was developed before 624, when the Xboat system was first established. So it roughly corresponds to the Imperial Civil War era.

TL 14 was matured by the late 900's, when the J-5 capable Azhanti High Lightning class Fleet Intruders were produced.

I have excluded the Darrians, as they mess it all up and their discoveries were not widespread. I have the suspicion much of their work was more theoretical than anything. I heavily relied upon the Library Data in GURPS Traveller, and the history section in Rim of Fire, as well as Mongoose Traveller 1e Core Book to give the dates and defining the technology levels.

Also, this falls seriously close to a fan wank here, but this might also be of some use. It's almost more detail than would be useful in my games, but it's still useful to the fandom at large.

UPDATE: Thanks to a response on the thread I started for this at Citizens of the Imperium, I learned this information. It comes from the MegaTraveller Referee's Companion.

Posted by Michael Thompson at 11:21 No comments: 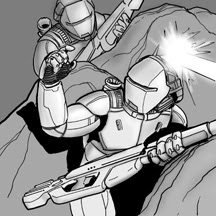 The Boxing Kangaroo has a small Imperial Marine Detachment of eight. They are led by SGT Guy Valdez, a native of Banadsan/Banadsan (SR 2920). A rather drab and uncomfortably crowded world, it produces a good number of people for the Imperial Service. Guy Valdez wanted off the world, and managed to convince an Imperial Marine recruiter that he was good enough to be one of those chosen souls. He showed it his first enlistment, where he was noted as being an excellent trooper and a candidate leadership.

His next term was an assignment to anti-terrorist operations on the Rim, and his unit was noted as being particularly successful. A reporter wrote a major book about, as did one officer, that were combined into a holovid miniseries. This gave Marine 1st Class Valdez a bit of notoriety, and a small gain in social standing. He was selected for and promoted to Corporal at this time. With the exception of being on a short media tour, he calls this a 'happy time'

The past three years saw him advanced to Sergeant, and his skill set deepened. Working security on for an Explosive Ordinance Disposal team near the Navy base at Ys/Gemini (SR 1732), an improvised explosive device set up as a secondary booby trap knocked his suit of Battle Dress around a bit, leading to a rather nasty scar on his nose and forehead. It has barely slowed him down.

Image is from SJ Games GURPS Traveller: Star Mercs, found at this location.
Posted by Michael Thompson at 23:29 No comments:

Email ThisBlogThis!Share to TwitterShare to FacebookShare to Pinterest
Labels: Characters

Smade's Planet/Gemini (SR 2433) has experienced a growth in population and local wealth. Exploiting it's position as a neutral world between two hostile states, it currently serves as a conduit for information across the armistice line, and a deal of tourism. Currently, population is believed to number several thousand, but the anarchy present on the world makes it difficult to know if these are either permanent residents or temporary hires on term contracts supporting tourism or other services. Both the Imperial and Solomani Navies have deployed patrol craft to the system for observation and conduct outbound customs checks, but local consuls are have set up a system to minimize interference on the other nation, and set up temporary visas.