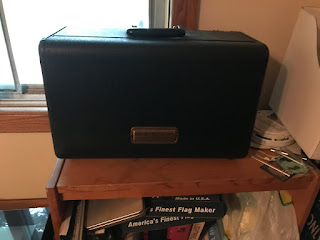 Some times, you find interesting things in the family. Like this old Zenith Super Trans-Oceanic Radio dating from around 1951. It's believed to have been purchased with one of my grandfather's first paychecks after finishing basic training for the US Air Force. While the old batteries may no longer work, it will still function on AC main power. It is mentioned in the technical specifications that both 115 VAC 60 Hz power and 220 VAC or VDC power can be used as power for the system. The system is best described as a 'luggable' in that while portable, it is not a personal device, and best for moving between periodic locations. Interestingly, it does feature a headphone jack. I rather doubt it would work with a set of modern earbuds with out a heavy duty adapter! 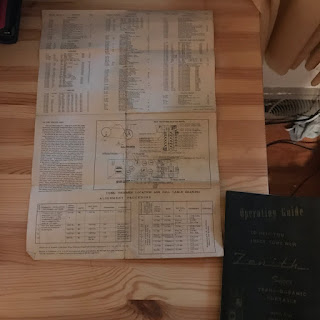 In this big, black case is a rather expensive radio, with an initial MSRP of around $200. There is a front and back page with technical specifications. I paged through the guide book, and it had a list of clear channel stations in the United States when published, as well as a time zone map and a log for shortwave radio stations the owner heard. Of the "clear channel stations", I saw  Minnesota's old 830 kHz WCCO and 1500 kHz KSTP which are still around, as was St. Olaf College's WCAL at 770 kHz and WDGY at 1130 kHz. Of that pair, WCAL was bought by MPR, and the 1130 kHz spot in the Twin Cities is now a talk radio station. Another thing I saw was the nomenclature for the signal frequency, mentioned as kilocycles, as in WGN 930 kc, rather than Hertz, as the latter was not adapted as a SI unit until 1960. 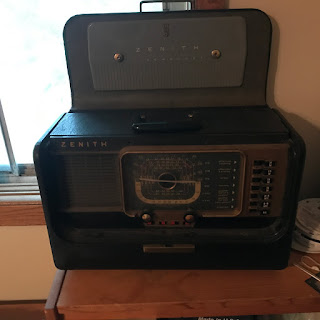 Here's what it looks like with the cover up. On the cover is an external antenna for the AM band, and a receiver for shortwave stations includes an extendable antenna as well. The station selection is a single dial system. It also features weather and time radio station, and the manual includes a guide to various weather stations and their schedules as of printing.

How could something like this work in a science fiction campaign? Well, vacuum tube electronics are more or less electromagnetic pulse resistant, which may be useful if the characters find themselves on a nuclear or high energy laden battlefield. I would not be surprised if a Fusion Gun could fry equipment. Also, a system like this, a heavy duty communications receiver could be a useful trade good for TL 5-6 worlds. Not only would it be a good size for various transportation methods, with the original designer being a keen yachtsman, but it is also locally repairable. Think of the graduate class in receiver construction this would be on a low TL backwater, and how it isn't crippleware making the user totally dependent on outside tech support. Pair a radio receiver with a simple solar charger system, and it could be sold on almost any world that is open for trade as an easy way to get information to a large number of people The relatively innocuous nature of a radio blends into espionage campaigns as well. Numbers stations exist, as do propaganda stations like Voice of America, the BBC World Service, and Radio Moscow.  An every day radio set can be part of a spy's sinister plans for the players to thwart.
Posted by Michael Thompson at 22:22 No comments: