Across the Bright Face, or Gustav’s No-good Very Bad Day 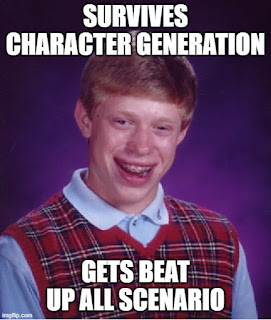 I actually got to play in a Traveller game tonight. Put on by the local Saturday Night Space Opera crew, we played the classic adventure "Across the Bright Face", ably refereed by Matt. Our cast of characters included a senior scout, a medic, a faceman/engineer, and a demolition expert/astrogator with a checkered past. I played the senior scout. Here's my diary format of the whole scenario.

090-1105
I’ve been working for the past few months as a mercenary. It’s taken me to Dinom/Lanth this time, where I’m bodyguarding a rich guy inspecting holdings. His name’s Arlent Streen. An unpleasant world, with only mines, but I’ve seen worse. So far, we’ve seen the ‘capital’ of Rhylan, and the city of Medianne, where at least he put us up in really nice quarters. I picked up a nice little multifunction radio, while our other guys, Franto and Corben, got a camera and a tarp. Odd choices.

While he’s inspecting a model ore processor, and the boss gets shot, as does his aide and the Major. They demand we surrender and turn over his briefcase, but we don’t want that. Stealing a tracked ATV, we head out of town. Blowing by some cops who don't notice us, we get to an open area outside of the city without a problem.

We get out of town, and find some tracks. We follow the tracks into the mountains. I get beaten up by a landslide, and Delfi, our medic who was a scientist, patches me up. A few hours later, we get ambushed by a group of ATVs. I fumble getting my helmet on, but the other gunner managed to get a shot off. Our ace driver managed to get us away from them really quick. Then there’s a small earthquake. I get injured again. This is not the ticket I thought it would be! Then we head to the hot zone.

091-1105
After the debacle in the mountain pass, moving into the hot zone. We pass some shacks, an iridescent area. Franto and Corben get the brilliant idea to rig the tarp as temporary shade as we roll across the hot zone. Then find a mineshaft. Out there? I figured it was nuts to head in there. The mineshaft, despite my misgivings, gets us closer to the starport. We keep moving through the hotzone. I get woken up to help fix the stolen ATV, then it’s back, and mountains again. They find another mineshaft, and then find a nice valley that gets us closer to the starport. Once we got to some clear terrain again, we get intercepted by a rebel ATV. One guy pops off a rocket, the wrong way, and they hit our turret. With me in it! Then we got a near miss with a rocket. After that, I went up with the machine gun, and opened fire. Took me a couple of shots, but I managed to get a good hit and depressurized them, allowing us to get to the starport. It turns out the briefcase the boss had was full of bearer shares. Now we can get our own ship, once we get off this rock and somewhere nice.

Read more »
Posted by Michael Thompson at 22:50 No comments: