This is a sort sequel to a post from when I first started this blog. While enlisted personnel have long been specialists, in the United States Navy, officers are often generalists, expected to go from contact coordinator one day to Engineering Officer of the Watch the next. Since the first edition of High Guard was published, there's been career tracks for officers in the Navy career. However, these place officers in the same narrow fields as enlisted, and just don't seem quite right to me. While Sector Fleet is an interesting book, at times it's very much an attempt to give the game a veneer of plausibility. One item from there, the idea of the Naval Regiment, I like. Reminiscent of the the Royal Naval Division of World War I, or the US Navy's Naval Expeditionary Combat Command and Seabees, it started off as local defense and ad-hoc units from remnants at Navy Bases, as well as security troops supporting the Marines.

Why do this for Traveller?
This provides more 'chrome' and a varied route through the ranks. Some officers are not going to be specialized like enlisted personnel, and this gives a path for defining officers who may have been the Chief Engineer and then went on to command their own ship. Also, I see the Imperial Navy as having four socially distinct groups of officers. First, is the Nobles and other Gentry (SOC A) who enter the Navy as a means for social advancement, and social responsibility. Those who join from both social responsibility and advancement. My own LT Brickley is one of those who joined to gain status. Considering how end of generation Navy promotions give an increasing to Social Standing, this is reasonable. Second, you have professional Navy Officers. The guys who Get Things Done aboard ship, and while not explicitly angling for command, they are ready for the responsibilities should the Navy need to expand. Third, is officers commissioned from the ranks. Long serving professional spacers who have skills and leadership above that of an enlisted man and deserve a different sort of recognition than princes using the Navy as a pathway to success. There's also the appointment of various personnel as officers to give them military authority equal to their professional status. This would be military doctors and the like. Uniformed professionals whose rank is consummate with expertise are also in the service, like doctors, are always going to exist.

Read more »
Posted by Michael Thompson at 20:16 No comments: 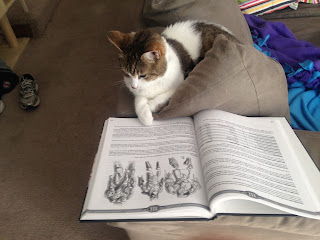 When I picked up my copy of Alien Module 1: Aslan, I took a picture of my cat, Nigel, with the book open in front of him. Recently, though, I considered to use the known habits of cats in my favor. Namely, they like to push things off of surfaces.


I placed Nigel on a card-table in my office, and placed dice on there close to the edge, and had him push them over the edge to roll the attributes and some of the early generation roles. He then leapt off the table, so I resumed generation with manual rolls. Meet Nigel the Aslan:

He's a former Commandant in his clan's space force, having served five terms before he was a prisoner of war in a small scale war between clans. The second son of a minor landholder in a major Clan, his family is just another productive cog in a larger machine known as the Hierate. A largely uneventful service, he resisted the temptation to run "war to the knife" against another population of Fteirle as a young officer. He saw it as wrong. He spent his time on a courier route to the Imperium later, learning to deal with other cultures, as well as developing an adaptable skill set. While not knowledgeable about ship's systems, he understood well enough what the female engineer staff was doing to respect them. As a Senior Lieutenant , he got into an honor duel with another male, where he easily bested him, despite being a rather small Aslan. Shortly there after, he spend the remainder of his career in a POW camp when in a war with a human state. He met another captured Aslan who was from a rival clan, and they worked together to maintain their honor as captives. Released, and with a small amount of territory, he's wondering if it's time to go home, or wander the stars. Having worked with humans, he's not averse to them, but wonders if the idea of a earning fortune, and landhold is worth something more than his country-house.

Read more »
Posted by Michael Thompson at 18:50 No comments: