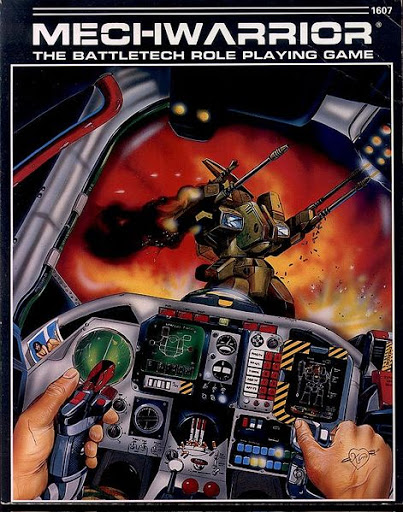 Taking a break from Traveller for the week, I'm going to one of my first gaming obsessions until next Sunday, with the various BattleTech roleplaying games. I'm starting off with the original 1986 FASA MechWarrior: the BattleTech Role Playing Game. I received my copy used some years ago, and never really touched it until I started preparing for this. It's an obtuse system that was replaced by a mechanically different Second Edition in 1991. I'll be covering that on Tuesday and Wednesday.
None of these systems are particularly random, except for portions of Third Edition, so I've had to make up my own tables for randomness of some items. For all of them, I'm running these random affiliation tables. When the time comes for the Clans, I'll roll 1D6, and on a 5 or 6, the character is a Clanner.
Great House Table: 1 Draconis Combine
2 Federated Suns
3 Capellan Confederation
4 Free Worlds League
5 Lyran Commonwealth
6 Minors
Minors Table 1 Mercenary
2 Outworlds Alliance
3 Taurian Concordat
4 Magistracy of Canopus
5 Bandit
6 Minor Independent (Aurgrian, etc.)
Then, using the information given for languages spoken in each state, I use a random name generator to produce a name and sex for the character. Now, here's the stats for my first MechWarrior 1e character:
Hedwig Theodocia Gebhard is a new graduate of the Coventry Military Academy at the age of 22. A member of a minor noble family from Ludwigshafen in the Coventry Province of the Protectorate of Donegal, she is currently the pilot of her family's 40 ton Vulcan BattleMech and assigned to the 7th Lyran Regulars, and stationed on Loric near the Free Worlds League. The Gebhards are currently involved in a running feud with the neighboring House Borge, over the right to form the militia on Ludwigshafen, and serve as planetary representative to the Estates General.