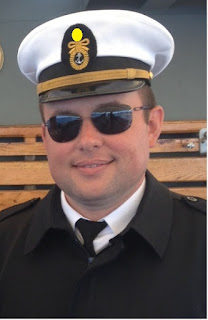 All ships need an capable right hand man, and someone the entire crew will respect. In the case of the Boxing Kangaroo, that man is Sublieutenant Eneri Mohammed Hassan, a veteran of far too many years of service in Strephon's fleet at age 41. He wears three hats aboard the Kangaroo, XO, Astrogator, and Senior Watch Officer.

A native of Kagaushus/Kerr (Massila 0402), he enlisted as a young man to escape the unpleasantness of that world. Over time, he grew into a man who knows the space ways. His initial service was uneventful, save for an incident where on brig detail, he was forced to subdue an unlucky soul attempting to escape. This earned him meritorious promotion to Able Spacehand. He began his specialization in Astrogation at this point.

He announced at the beginning of his next term he wanted to strike* Quartermaster. He easily passed those requirements, and was promoted to Quartermaster 3rd Class. Assigned to a ship conducting a tour of the client states in the Delphi Sector's trailing region, he learned wilderness survival.

His next tour was in the Old Expanses, where conflict with Solomani renegades earned him a nasty little scar across the chest, and he got handy with a cutlass. This tour led to his promotion to Quartermaster 2nd Class.

The fourth tour was to the Naval Depot in the Solomani Rim as a staff Astrogation Assistant. Then Quartermaster 2nd Class Hassan met a young widow working in the Personnel Section, and began a relationship with her. This persuaded him to apply himself and pass the exam for Quartermaster 1st Class.

Shortly thereafter, he found himself working closely with the senior officers of Sylea-class Battleship INS Nagiida. Working hard, he gained the reputation as the leader of the Astrogation Section, and the confidence of the Captain. There may be something regarding a liberty incident neither will speak about. He capped off this tour with selection for Chief Petty Officer, and award of the Long Service Medal.

Prior to his assignment to the Kangaroo, he was conducting a counter piracy mission, where it turned out that one of the suspects was the former spacer he had an altercation with as an Able Spacehand. He worked with the man to ensure a reduction in sentence by turning Emperor's Evidence, and it allowed the rest of the gang to be broken, earning Eneri a Meritorious Performance of Duties citation. He followed this up with a commission, and recently completed education for his current role, after a brief apprentice cruise.

*Meaning specialize in.
Posted by Michael Thompson at 22:18