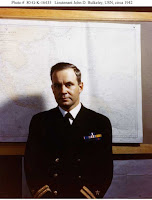 The Boxing Kangaroo is commanded by LT Ian Brickley, IN. Age 32, this is his first command of a Starship. He is a native of Anacreon/Esperence (SR 1011), a Rich, Twilight World. In his youth, he did enjoy himself a bit, but was a member of a youth debate league, and read history as well. Desiring to serve the Imperium, and see more of the universe (his family is the respected operators of an adventure resort, and he met a number of senior officers and nobles in the course of working with there) he applied to and was accepted to the Rim Naval Academy at Dingir. He was enrolled in the Flight Program, and passed the courses, and received his commission as an Ensign.

In serving aboard a destroyer on a routine patrol mission during his first tour, he obtained a sensor contact of a Solomani infiltration ship. The ship surrendered once interrogated to avoid a further diplomatic incident, and he was awarded the MCUF, and promoted to Sublieutenant.

His next mission led him to serving aboard INS Mortal Quench-Fire (CF-6401) in an extended operation in the Reaver's Deep while serving as Junior Officer of the Deck and 1st Lieutenant, was instrumental in the pursuit and destruction of a pirate band. This recognition lead to his promotion. Transferred to a command school, met an important diplomat working with Imperial-Solomani relations.This lead to his requesting to be posted to near the Armistice Line. He briefly held command of SDB during 1118 and early 1119 as a precusor to being assigned to the Boxing Kangaroo.

Posted by Michael Thompson at 15:51