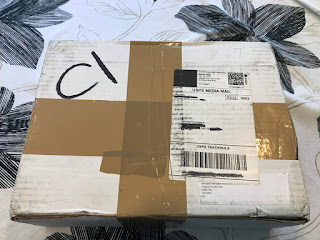 This spring, against possibly my better judgement, I backed the Traveller 5.10 Kickstarter. Despite the delay, the packages were shipped on October 16th, and arrived on the 19th, a delivery day in advance of what was stated. The Courier route to me was a bit more direct than most, it seems. The box arrived with out an issue, and largely damaged from when it was on the pile at Mr. Miller's residence in his last update. 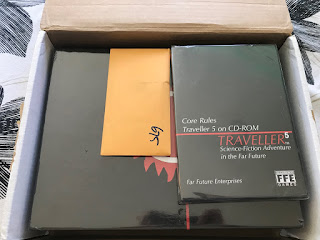 With Mr. Miller's local sports page from last week removed, this is the interior. You can see the CD-Rom edition of the books and the manila envelope of extras above the three volumes in their dust cover. It's a good idea of what's next. I might lend my copy of the CD-ROM to friends and family, as I already have the electronic edition, and I really like the books for my own reference. Easier to flip back and forth. 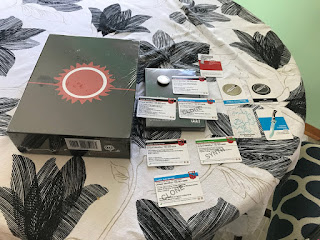 In this one, here's the contents of the shipping box. Complete crew ID's for the Free Trader Olympus, under Captain and Sir Eneri Treen, late of the Imperial Marines, and five crewmembers, two clones from the same series, and a synth. The other cards include the Spinward Main, Imperial Marine Commando Knife, Improved Heavy Pistol, and Wound and Death Badges. Also included, and on the CD case, is a badge reading "Free Trader <Insert-Name-Here>. The books, in their cover and shrink wrap, are hefty enough on their own. 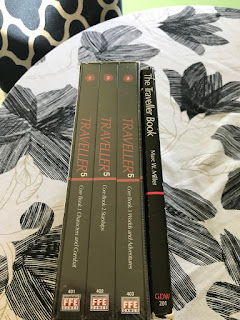 And here at the end, are my three books, sitting next to a forerunner of the line, my copy of The Traveller Book. The white on black with a red line trade dress has served the game and system well; as this is the fourth version to use it in some fashion. Classic Traveller, GURPS Traveller, Mongoose 1st Edition, and now Traveller 5. It's a simple, clean layout that immediately establishes the line in the target audience immediately at this point. The biggest difference is how an entire game and two short adventures, were contained in a single book at one point, now is published in sets of three! Not a bad haul for gaming these days, for around $100.
Posted by Michael Thompson at 4:13 PM