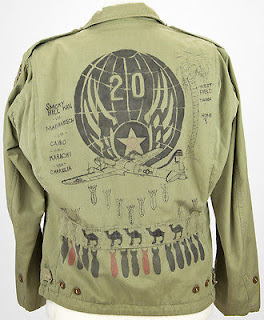 In some regions, it is common to see men and women who have served in an armed force or who have traveled for long journeys across the stars to either purchase or obtain a jacket of this type.

Usually, it is either a jack or mesh jacket, but in some areas a synthetic fiber jacket is the base. The left breast has the individual's name, final rank, and service in all cases. Pilot will wear flight wings appropriate to their service, Army veterans may wear regimental insignia here, and Marines wear the badge of their Corps. Call signs would go here as well. The right often has a command insignia, or may be blank. The right shoulder carries the national or mercenary command logo the wearer is most comfortable with. The left may have a different command's insignia, especially if the wearer served in combat. The back of the jacket, though, is often the most intricately decorated. It often has patches of vehicles the wearer drove, ships served on, major exercises, and historic incidents avoided or participated in. It is almost a visual resume of the wearer's experiences. So if you hear the old Sarge is going out to the frontier, a good retirement gift is a mesh or jack with something to note his service. It might save his life or get him in with the right people. 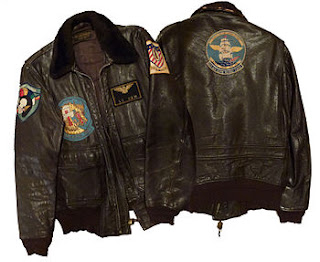 Cost: Easily twice to three times the base cost for jack or mesh armor. This could be Cr 300 or more.

Legality: Because these are mostly seen as 'keepsakes' and a part of Travelling culture, most law enforcement will not overly harass wearers of these jackets. However, if the 'privilege' is being abused, expect some kind of social sanction, such as being followed, or denouncement by a local veterans organizations.

I got this idea from having seen customized MA-1 jackets by more recent US veterans, and the old flight jackets with custom paint jobs. My grandfather had a custom silk embroidered jacket made for him in Japan during the Korean War.

Adventure Seed: The Old Jacket in the Window
While going about their business in startown, one of the characters (preferably of a military or related background) notes the presence of a veteran's jacket in the window of a pawn shop. The insignia is one of the familiar 179th Fighter Squadron (The Bulldogs), with several familiar looking emblems. Examining the jacket, it turns out it was the property of one Lieutenant Willem Amador, an acquaintance of the character's. A check with the owner turns out that it had been sold to him a few weeks before by a spacer who was in need of quick cash. It's on sale for only Cr 200, well under what these jackets are made for, and it's sentimental value.

1. The jacket was sold by Amador. He was medically retired, and can barely support himself and his family. He will be grateful for any assistance, and would greatly appreciate it's return.
2. Amador died on a journey to or through this world. It was sold by the crew of the ship he was traveling on. His body is preserved in a cryogenic capsule in the starport morgue, with no next of kin on world. It turns out his homeworld is a nearby world. Would the character help an old comrade home one last time?
3. There is a storage chip hidden in the lining, containing a message. It turns out that Amador was murdered while serving as an officer courier. The message tells the characters to turn in the message to the Senior Naval Officer present in a nearby system. What the information does is up to the GM. It may start a war, prevent a war, or draw the characters into a web of espionage.
4. As above, but the message reveals the free trader Amador was on working with a pirate gang. He gives valuable information about where this gang operates from.
5. Amador is very much alive. His jacket was lost on a voyage near the system, and the man who sold it to the pawnbroker was a spacer who was ordered to get rid of it. Help Amador embarrass the man who wanted to be rid of the jacket rather than return it, and earn either a hefty reward, or an ongoing patron, as well as maintain a contact.
6. Amador passed away, but the Bulldogs would like his jacket back. It turns out their main ready room has a collection of fallen members jackets. Return it to them, and become members of their family. Merchant PC's may get charters to support them on operations, and passengers from time to time from the squadron. Who knows what help a network of fighter pilots might offer you.

UPDATE: 9:46 PM:  here's my grandfather's jacket from the Korean War era.
Posted by Michael Thompson at 18:36